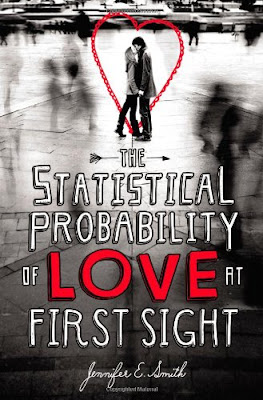 The romantic in me just cried out for this book. I wanted so badly for Hadley and Oliver to end up together.

Okay, yes it does seem a bit far fetched that two random strangers meet on a plane, talk forever and feel that kinship that grows to be love in less than 14 hours. BUT my non-rational heart in me screams, "It is possible!" There are many moments in this book that I caught myself denying the parts actually could happen, but that was immediately covered up by love itself does find it's way.

Hadley is going to London to see her father who is getting remarried to a woman Hadley has never deigned to meet. Quite frankly she wouldn't even have been on the way to this wedding had her mother not insisted she go. Her father left them after being in London for half a year and falling in love with this other woman. He broke up their family and broke Hadley's heart. She doesn't want to see him.

Oliver is going to London to return to his family. His story is a bit of a mystery until the end so I am not going to give away any of it.

Hadley and Oliver are cute together. They kind of fit. There strangeness in family matters and their vulnerability catches my heart. I really liked that Jennifer Smith did a great job never letting on whether or not they would actually end up in the end. So read it and find out.

Summary -
Who would have guessed that four minutes could change everything?

Today should be one of the worst days of seventeen-year-old Hadley Sullivan's life. She's stuck at JFK, late to her father's second wedding, which is taking place in London and involves a soon to be step-mother that Hadley's never even met. Then she meets the perfect boy in the airport's cramped waiting area. His name is Oliver, he's British, and he's in seat 18C. Hadley's in 18A.

Twists of fate and quirks of timing play out in this thoughtful novel about family connections, second chances and first loves. Set over a 24-hour-period, Hadley and Oliver's story will make you believe that true love finds you when you're least expecting it.