Review - Two for the Dough by Janet Evanovich 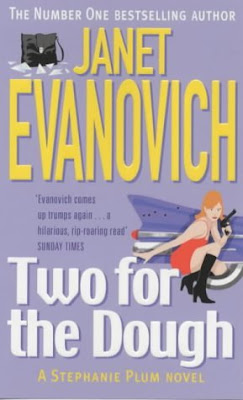 I am completely captivated by this series. I read the first one simply to see the movie. Heaven forbid I see the movie first and I just love Katherine Heigel.

I bought the second one just to find out if the others were as good as the first. I have to say the second one lacked just a little bit. But only a touch. There were a few slow moments in this book, but for the most part it was as comical, fun-sleuthing and gun totting as the first. I really like that there is a romantic pull between Stephanie and Morelli, the sexy cop she chases in the first book. I love that they pull her Grandmother in the story. She wants to be a cop too, so Stephanie gets to keep bringing her Grandma along on these adventures and the two of them get into quite the trouble!

One of the great things about her books is they are available through the library, but I have been buying them on my Nook because I know I will want to keep them.

Summary -
Kenny Mancuso shot his childhood buddy Moogey Bues and then jumped bail. Now bounty hunter Stephanie Plum is on the case to track Kenny down. Then someone finished Moogey off, Kenny can't be found, twenty-four coffins are missing, and there's some ex-army heavy artillery roaming the streets.

I really enjoy this series. I did however stop buying them about 14. Now I just borrow them from a few people I know who love them too.

I'm glad to hear that you are enjoying this series so much! I've read the first three books and am looking forward to reading the 4th book sometime soon! Great review :)