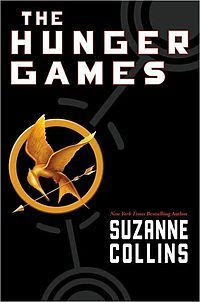 As many people have probably already said, I highly recommend this book to everyone. It is such a phenomenal read. So many wonderful lessons - Be yourself; Work smarter not harder; Make friends, but be cautious; Use your strengths; Sometimes surviving is more important.

I really loved Katniss. Her character is so strong and so amazing. It really makes the reader wonder if they too would be so courageous. She ends up taking care of her mother and sister when her father is killed. She is the food bearer, the mother, the provider and all the loving family members required. She has little to herself except the spare time she allows herself to hunt - outside the city allowed lines. That is where she talks and hangs with Gale, her secret friend. Katniss is an expert marksman with her bow and arrow. She can also climb trees like a monkey. She is skilled in the ways of the forest knowing the good and dangerous food, plants and sounds. She and Gale long to skip away and be lost in the forest, free and alive, but Katniss will not leave her family.

The city controls the entire twelve districts that provide for the city. Each district has a specialty, Katniss resides in District 12 known for coal mining. Where the city reigns in materials, food and wealth the outer districts are poor and rely on the city to provide for them. This way they always have allegiance to the city.

As a thank you to the city for providing, each year two children are chosen to lead their district in the hunger games. Games in which there is only one victor, or two if happen to come from the same district. All children who are in need may put their names in the drawing as many times as needed for food, clothing, etc, but their name gets a higher probability of being drawn. We learn later in the book that District 1 trains all their children from a very young age to be the best in the Hunger Games; to win and therefore provide the necessary food for their district each year.

I was completely disgusted by the amount of waste, lack of accountability and humor regarding the districts from the city. The city is so arrogant and clueless that they have no idea how sick the tributes feel being lavished in food and personal grooming only to be pawns before a televised audience as they die.

Surprisingly I felt the movie did a pretty spectacular job of sticking with the plot, feeling and overall quality of the book. Sadly, if a viewer did not read the book I feel they would be a bit lost as to why the city was so obviously colorful and brutally gaudy. I also fel they would not truly understand all the history of the hunger games, districts and the reason behind the actual need for each districts. They really skipped over that part, using the saying "May the odds be ever in your favor" as a way of explaining. I thought they could not have picked a better Katniss for the movie. She did embodied the character. I didn't care for the actor who played Petta, but I didn't like him the books either.

In the three books, the first in the series is my favorite. The newness of the idea, the rawness of the horror and the belief that Katniss will prevail is amazing. The second book was incredibly cruel and the third a bit lacking. But overall, I really love the series. It is insurmountably intelligent and reaches all levels of people.

I agree with this totally- I think people who didn't read the books probably missed out on a lot of the reasons why they have the games- there was that videotape but, to me, it didn't properly explain. I didn't think President Snow was scary enough either although he was a bit at the end! Katniss was awesome- she really was the best character in it...as it should be! x

The Mistress of the Dark said...

I figure I'll have these read by the time the movie comes out on dvd!

I pretty much agree with everything you said. I thought the movie was very good, but it could not approach the book. There is just si much inthe book that could only bebsuggested inthe movie, just due to time. And certainly, the first was the best of the three books.

When I first saw who was cat as Katniss, I was not thrilled, but as is often true, I was wrong..she was excellent.