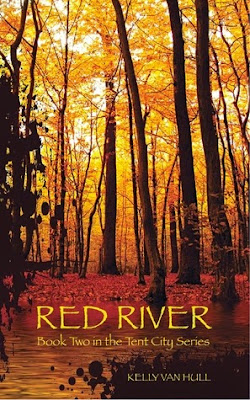 I am excited as I usually do not care for the second book in a series more than the first as the first paints a world I have never seen before and the second reviews and expands on the initial eye opening experience. But Red River gave me so much more to the imagination that it really had me captivated. Again.

Dani's character is much more developed and less distraught by the world's situation, so she is able to make a bigger impact. Her love situation is still in tatters, but we get to see her make an honest choice between the two interests.

Hannah, who turned into my favorite character is new in this book. She has a natural ability to heal people and her story to how to came to have this debilitating power is heart-breaking. Her love of life and willingness to hurt herself to save others is simply stunning.

I am really looking forward to where this series is headed. It is one of the few I cannot garner an idea of what will happen, so reading it is has been quite enlightening.

Goodreads Description:
No one knows Brody’s secret and Dani plans to keep it that way.

It's been seven years since the first plague. Things seem safe - until the river runs red and the blood-filled waters set off a series of catastrophic events. Seeking refuge once again, Dani and her group make their way back to Tent City, unsure of what the future holds.

Can Dani keep Brody safe long enough to fulfill the prophecy? Who can she trust? Will she be able to bring down The Council before they destroy what she holds most dear? With the plagues looming, is there a bigger threat than just The Council?

In the midst of chaos, Dani finds love, but is forced to choose between two brothers - the one who can’t live without her and the one she has promised herself to – knowing the decision could destroy their relationship forever.

Red River is the second book in the Tent City series. It is a young adult dystopian novel of biblical proportions set in the Black Hills of South Dakota.