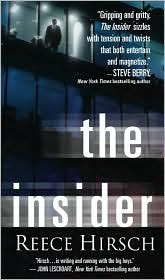 Like a good thriller? Like a book that keeps you guessing and supplies the reader with twists and turns??? This is definitely the book for you.

Will is a lawyer at a really nice firm on his way to becoming partner, when a fellow associate is tossed from his office window with Will's key card implicating him in his death. He is then introduced to some Russian Mafya contacts who are looking to extort some valuable insider trading information from him. The good thing is they must keep him alive to keep attaining information, the bad is they can hurt him repeatedly. I liked Will. He is smart, but not too smart. He shows his vulnerabilities well, which always makes the character more likable and easier to root for. He had a soft spot for women, Kafta, a Russian who finds him attractive and Claire, a paralegal in his office. I hate to admit it, but one of the Russian Mafya contacts was one of my favorite characters. I don't usually go for the bad guys, but Yuri was funny, stupid and so incredibly fun to read. Some of the most laugh out loud parts though simply involved Will's inner dialog. I had it all wrong too. I kept changing my guess of who was behind it all and then it wasn't until it was almost announced in the book that I caught on. Then again, I really enjoyed just sitting back and reading this book. It wouldn't be fair to say this is a summer read because that would make it seem like it was light and fluffy when in fact, this novel is full of action, lies and intellectual. Just when I thought things were winding down, something else popped up, but it was done in a way that really pulled the book together instead of making it jumbled. I really liked that it spoke up to the reader. For a first novel, I was very impressed. Can't wait to read what Reece Hirsch will write next. Reece Hirsch is a partner in the San Francisco office or Morgan, Lewis & Bockius LLP specializing in privacy, security and healthcare law. He is a nationally recognized privacy and security law expert and has been listed in Chambers USA: America's Best Lawyers for Business from 2005-2010. Reece was also selected as an "Outstanding Healthcare Information Technology Attorney" by Nightingale's for 2009. Reece is a member of the Board of Directors of 826 National and The Valentino Achak Deng Foundation.

Reece earned his law degree from the University of Southern California and a B.S. degree in journalism from Northwestern University. Prior to law school, Reece worked as a journalist in Atlanta for several years, including a stint as an assistant editor of a business magazine. For three years, he edited and published an arts and entertainment magazine in Atlanta.

Reece lives in the San Francisco Bay Area with his wife Kathy and their dog Simon. Reece's ramblings can be found every other Saturday at the 7 Criminal Minds blog.


Interview -
First of all, I REALLY, REALLY want to thank you for allowing me to interview you on my blog and offer up a FREE COPY to giveaway to one lucky reader!! Also, some of the questions I wanted to ask Reece are already answered on his blog, so just in case there is a question you are dying to know the answer to, go visit there!

What would you like people to know about you?
I'd like people to know that I'm involved with a wonderful organization called 826 National, which conducts writing programs for young people in underserved communities. The organization started in San Francisco, but now has chapters in Los Angeles, Seattle, Chicago, Michigan, Washington, D.C., and Boston. They're always looking for volunteers for tutoring and other services, so if you live in one of those communities (or even if you don't), check them out at www.826national.org.

Do you have a favorite character in The Insider?
I'm closest to the character Will because I know people like that very well from practicing law for over 20 years. However, my favorite character would have to be Yuri, the would-be Russian gangster. He takes so much pleasure in wreaking havoc that I always enjoyed writing the chapters that he appears in. Yuri mirrors Will in some ways because they're both young men trying to get ahead in the world -- one in the legal world and one in the not-so-legal world.

What is your process for writing?
I think my writing process has become more streamlined over time. Because THE INSIDER was my first book, I made a lot of beginner's mistakes. I revised and revised THE INSIDER over a period of six years. I did more than one page-one rewrite of the manuscript. With the second book that I'm writing, I think that I'm able to get things right the first time in a way that I wasn't able to before.

What advice to you have for those of us (ahem) who would like to write and be published one day?
The best advice I can give is to keep writing and don't underestimate how polished your book needs to land an agent and then a publisher. When I sent my manuscript out to agents the first time, everyone passed on it and I had to recognize that it just wasn't ready yet. The writers who get published are the ones who don't get discouraged and keep working to write the best book that they can.

Summary -
First corporate attorney Will Connelly's colleague hurtles to his death outside his office window. Within days, Will is a prime suspect in a murder, the target of an S.E.C. insider trading investigation, and a pawn in a complex criminal scheme involving the Russian mafia and a ruthless terrorist plot. Now, to top things off, he must ensure a deadly enemy doesn't gain access to the nation's most sensitive and confidential information-that has the power to do incalculable, irrevocable harm.

GIVEAWAY!!!!
One very lucky winner will receive
a paperback copy of
THE INSIDER by Reece Hirsch
(can we get a round of applause
for an awesomely, kind author??)

RULES:
You do not have to be a follower of mine
but you may do so if you like my blog
or please feel free to follow me on
GOODREADS
OR
TWITTER
OR
FACEBOOK
(see links to right of blog post)
One entry per person.
Winner will be contacted by email.
Winner will have 3 days to contact me
with address for sending out copy of book.
US addresses only (sorry)
Contest ends on . . . . Aug 11, 2011!!!

How to enter:
Leave a comment on this post with
1. WHY you want to read this book
OR WHAT about this post interests you
2. Name as you would like to be announced
3. Your email address
***Those who do not do this will be disqualified***

Thrillers are fun, but toss in some humor, and it's gold to me. This book sounds right up my alley.