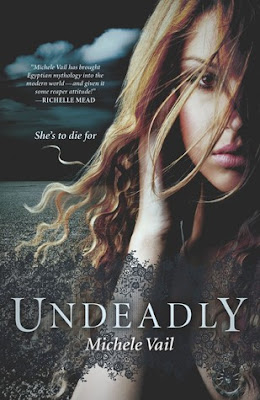 I have to say this book started off really slow for me. It took me about a quarter of the way through to really start to get sucked in the plot. What threw me was the dead boyfriend. His character was a bit odd and seemed off, yet he was present often. I just kept thinking what are they doing with him and why is he still "alive".

Molly was a good character. Not necessarily a strong female lead. But I liked her. She wanted the good in people. She liked to not discount just based on past experiences. She wasn't just bent on following the orders of others, going with the big bad killer or any of that.

My favorite character was Rath, the already dead Reaper Molly stole Rick (her boyfriend) from killing. He was strong, sexy and very mysterious. I like that. He wanted to kiss her, but remained focused on his job. He didn't need to follow her around like a puppy or become jealous of her dead guy Rick.

The plot was different than anything I have ever read which was a breath of fresh air. I would have liked to see a bit stronger play on the weird in between characters that seemed to survive to have a purpose that to me was deflated. But by the end, I am really excited to read the next book in the series.

Summary -
The day I turned 16, my boyfriend-to-be died. I brought him back to life. Then things got a little weird...

Molly Bartolucci wants to blend in, date hottie Rick and keep her zombie-raising abilities on the down-low. Then the god Anubis chooses her to become a reaper—and she accidentally undoes the work of another reaper, Rath. Within days, she's shipped off to the Nekyia Academy, an elite boarding school that trains the best necromancers in the world. And her personal reaping tutor? Rath.

Life at Nekyia has its plusses. Molly has her own personal ghoul, for one. Rick follows her there out of the blue, for another...except, there's something a little off about him. When students at the academy start to die and Rath disappears, Molly starts to wonder if anything is as it seems. Only one thing is certain—-Molly's got an undeadly knack for finding trouble....