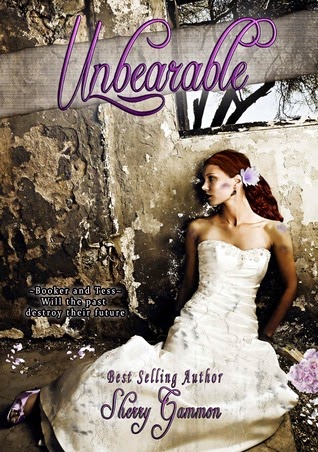 I have read first book by Sherry Gammon called Unlovable, but for some reason I do not remember reading the second book in the series, Unbelievable. So, I will be adding that to my reading list after finishing this review. :)

I highly recommend reading this book as it touches on a few subjects generally kept in the dark - domestic violence, rape, cheating and how to cope with them. Gammon brings these subjects up so well, in all her books, that you do not even realize she is describing a whole new world until it comes crashing down on the reader and we are forced to ride it out because it is impossible to put the book down. Gammon weaves these tales so intricately that it feels like the reader is living the book.

Gammon creates, introduces and develops characters like Tess that are completely wrecked and trying to survive. Women that I root for at the same time I want to protect. She writes strong, yet vulnerable heroes like Booker who do such a wonderful job of being realistic. Honestly though, my favorite characters ended up being Booker's family because they played such a large role in the story.  As family is usually in the middle of your relationship.

Even though she covers unhappy topics, the plot is still light enough to be read on vacation or during a work break.

Sherry Gammon also follows up with Maggie, the young woman who was raising her alcoholic mother in the first book in the series, whom I absolutely love.

Summary - Booker Gatto is done. Done with women, his old life, all of it. Only the love of his friends in Port Fare keeps him going as he leaves the MET in exchange for the quiet life his new law practice will provide.

Tess Selleck, once as ambitious and determined as she is smart and beautiful, had to leave everything and everyone she loves in San Diego to escape the man who destroyed her dreams and now wants her dead.
Together Booker and Tess find love when they least expect it, until their pasts drive them apart. Is there a happily ever after for these damaged lovers? Or is the thought of loving and trusting again simply Unbearable?

Unbearable is the exciting conclusion to the Port Fare Series. Join Booker as he struggles to find his happily ever after.

Wow Awesome!! Thank you so much!

Thank you so much!! I love your review and I appreciate you being part of the tour! If you want a copy of book 2 let me know and I'll email you one!

Thank you so much!! I love your review and I appreciate you being part of the tour! If you want a copy of book 2 let me know and I'll email you one!