Review - Between a Rock and a Hard Place by Aron Ralston 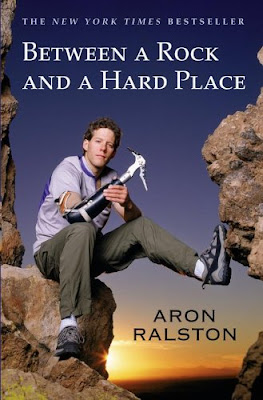 It is the most astonishing thing to be reading a book I know the outcome of and yet I am riveted. I cannot look away. My breathing increases. My heart pounding. My body tense, just waiting and reading as fast as I can to get past this part or maybe just because I am so engulfed in the adrenaline of this book I feel like I am experiencing it too.

I can honestly say I never thought I would want to see the movie. Gore makes me ill. But when I realized I was so interested in this that I figured I would read the book. My own gore in my head would be the worst I would experience. But man oh man, does Aron Ralston write a very descriptive book. The way he describes the rock, the climbing methods, the wind and sky - all of it so poignant and clear. I feel as if I am there, seeing it, feeling it.

And as he gets to the part about dying, haven't had water for days, the visions he sees, not being able to hold on to thoughts for very long, the parchness of his vocal chords. It is amazing to read how he had to drink his own pee and the learning the goes along with does he or doesn't it.

For someone who enjoys the outdoors and swam for 10 years on two different swim teams, I am familiar with going until you can't go anymore and then going farther because there is no other choice. I understand mental over body. I know what it feels like to be pressed to the core and know I will survive. If my body is sore and hurting that means I am still alive.

This book was so wonderfully well written. I truly loved it. It is sad and gruesome. It is somber and sweet. But mostly it is something every single person should read and understand.

How amazing to know you are going to die, and live instead. To find the will, the answer to getting free. To know no one is coming to save you, you are your only hope. Usually books that speak of dying don't necessarily describe it in a manner I can understand or relate to. Oddly enough, Aron Ralston does an incredible job. Maybe it's one athlete speaking to another, who knows.

I found it heartbreaking to read about his knowledge that he hadn't told one soul where he was going or when he would be back. This knowledge is the most soul wrenching for me.

Summary -
One of the most extraordinary survival stories ever told -- Aron Ralston's searing account of his six days trapped in one of the most remote spots in America, and how one inspired act of bravery brought him home.

It started out as a simple hike in the Utah canyonlands on a warm Saturday afternoon. For Aron Ralston, a twenty-seven-year-old mountaineer and outdoorsman, a walk into the remote Blue John Canyon was a chance to get a break from a winter of solo climbing Colorado's highest and toughest peaks. He'd earned this weekend vacation, and though he met two charming women along the way, by early afternoon he finally found himself in his element: alone, with just the beauty of the natural world all around him.

It was 2:41 P.M. Eight miles from his truck, in a deep and narrow slot canyon, Aron was climbing down off a wedged boulder when the rock suddenly, and terrifyingly, came loose. Before he could get out of the way, the falling stone pinned his right hand and wrist against the canyon wall.

And so began six days of hell for Aron Ralston. With scant water and little food, no jacket for the painfully cold nights, and the terrible knowledge that he'd told no one where he was headed, he found himself facing a lingering death -- trapped by an 800-pound boulder 100 feet down in the bottom of a canyon. As he eliminated his escape options one by one through the days, Aron faced the full horror of his predicament: By the time any possible search and rescue effort would begin, he'd most probably have died of dehydration, if a flash flood didn't drown him before that.

What does one do in the face of almost certain death? Using the video camera from his pack, Aron began recording his grateful good-byes to his family and friends all over the country, thinking back over a life filled with adventure, and documenting a last will and testament with the hope that someone would find it. (For their part, his family and friends had instigated a major search for Aron, the amazing details of which are also documented here for the first time.) The knowledge of their love kept Aron Ralston alive, until a divine inspiration on Thursday morning solved the riddle of the boulder. Aron then committed the most extreme act imaginable to save himself.

Between a Rock and a Hard Place -- a brilliantly written, funny, honest, inspiring, and downright astonishing report from the line where death meets life -- will surely take its place in the annals of classic adventure stories.

Email ThisBlogThis!Share to TwitterShare to FacebookShare to Pinterest
Labels: Aron Rolston, Between a Rock and a Hard Place, book review

I haven't watched the film as I was a little worried about a certain part of it. Sounds like I'm going to have to read the book though! Fantastic review! :)