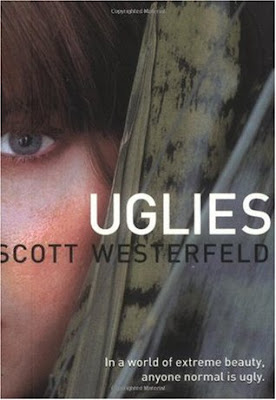 When I first started this book, I honestly didn't think I'd finish it. I didn't like it. The language was very tedious and mundane. I felt like I was reading the same sentence over and over again. Granted this is a girl who is turning 16 years, most of us don't have many coherent thoughts then either, but I just felt like it was dumbed down.

Oddly enough, the more I read, the more I liked the book and before I knew it I was flying through the pages and of course, now I want to know what happens in the second book.

I get that the society is bred to be dumb at first. Taught to hate how they look and make fun of each other to push themselves into getting the surgery to become pretty. I get that they are all kids and just out to have a good time before "growing up". It did change thought. It was almost as if the more Tally learned of life, the more the sentences became real and not so dumb.

I cannot believe I actually liked this book. I am shocked because I really wasn't impressed to begin with. But now I really am enamored with the characters, the plot and where it is going.

Tally is the main character. She cannot wait to become pretty and meet up with her other friends who are already living in Pretty Town. Til she meets Shay, a girl who cannot wait to be free of this travesty called "growing up and becoming pretty". Surprise, surprise, she likes who she is and what she looks like. GOOD FOR HER! Tally is so deep in the thick of wanting to be like everyone else, she doesn't understand Shay, but they become friends anyhow. Then one night, Shay appears to tell Tally she is leaving and wants her to come with her. There is a society that lives and grows on their own, no surgery required. It's called Smoke. But Talley refuses to go. When Tally arrives days later for her surgery to become pretty, the authorities are not happy that Shay has disappeared. They want Tally to go get her and bring her back and Tally will not have her surgery until then.

As you can imagine, Tally's journey is very eye opening. She meets David, the only boy ever born outside of Ugly and Pretty Town. His parent's who used to be pretty and have a secret of their own. It is a fight for Tally, does she tell the truth and keep her friends or does she betray them all and get what she wants?

Summary -
Tally is about to turn sixteen, and she can't wait. Not for her license -- for turning pretty. In Tally's world, your sixteenth birthday brings an operation that turns you from a repellent ugly into a stunningly attractive pretty and catapults you into a high-tech paradise where your only job is to have a really great time. In just a few weeks Tally will be there.

But Tally's new friend Shay isn't sure she wants to be pretty. She'd rather risk life on the outside. When Shay runs away, Tally learns about a whole new side of the pretty world -- and it isn't very pretty. The authorities offer Tally the worst choice she can imagine: find her friend and turn her in, or never turn pretty at all. The choice Tally makes changes her world forever.

Really interesting review because I haven't read that many about this book, but it is one that I've been wanting to read for quite a while now.

The Mistress of the Dark said...

I have this whole series on my TBR pile. I'm going to have to read them soon.

I loved this series so much. A couple of bits get a bit slow but its a great series I hope you continue to enjoy it!